"Taking a new step... is what people fear most." 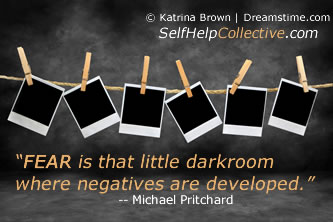 You'll find a few inspirational quotations listed on this page too - together with links to other pages about fear - that might shed some light on this causes of fear subject, also. Fear quotes like this one:

"Loneliness is about the scariest thing out there."
-- Joss Whedon

Fear - why do we have it? What purpose does fear have for us in our lives? And what are the causes of fear?

Hmm, well CK* does a good job of explaining - both scientifically and otherwise - what causes fear, giving us the most common fears for various age groups. (And, as you can imagine, some of these fears are strange fears quite often!)

As for me, what causes my fear? Well, before I reveal my fears to you can I share with you another fear quote:

They all probably stem from early childhood experiences that were painful AND that I interpreted the wrong way!

And rather than me facing these 'fears' over time, via taking positive and confident actions, I most likely vindicated each and every one of them instead: I selectively viewed my experiences according to my fears - a self-fulfilling prophecy that cemented my fears based on my limited beliefs.

(Which is what the YouTube video talks about below!)

Still, I mostly believe that the causes of fear are of curiosity value only. I think it is far more important to recognise and then to overcome fears (don 't you?). Over to CK* now, for more...

What follows is a very brief look at some of the causes of fear:

What Causes Fear - A Scientist's Perspective...

Well, it is a natural response to danger or pain for one thing. And Scientists believe it comes about as a result of natural selection. Early humans were more likely to survive (and reproduce) if they recognized or feared dangerous situations and were able to avoid them.

Continuing on with the scientific explanation, there are almond-shaped structures within the brain called amygdalae. These structures are the key processing centers for negative emotions.

Hyperactivity in the amygdalae can be seen using magnetic resonance imaging (MRI) and other devices, as brought on when people are shown pictures of threatening faces or other frightening images...

What Causes Us To Feel Fear Changes As We Grow...

Surveys indicate that a person's most common fears change with age. Children between the ages of 13 and 15 were asked what they feared the most in a 2005 Gallup poll. Their list of fears included...

Another aspect of what causes fear has to do with what is currently going on in the world. The terrorist attack fears listed in the 2005 survey would not have been mentioned prior to 2001. While flying has always been among the most common fears, more Americans became afraid of flying after 9-11.

The easy way to avoid this cause it to turn off the news!

Phobias involve more than being afraid of something. The main symptom of a phobia is an unreasonable desire to AVOID what is feared. Thus, you might not like to fly. But if you had to travel across country, you would only go to unreasonable lengths to avoid flying if you had a phobia.

Identifying what causes fear of an irrational nature and facing the stimulus can be a solution. For example, a person afraid of elevators could start by riding just from one floor to the next. That kind of treatment is referred to as desensitization. It works for many people.

(*)CK is an anonymous contributor to the Self Help Collective.

And when I say YouTube, I really mean M.Farouk Radwan of 2KnowMyself.com...