Take responsibility for your own actions!

Thus is the clarion call of many, when it comes to success

Other so-called success secrets include these gems:

And who could argue with such common-sense wisdom? 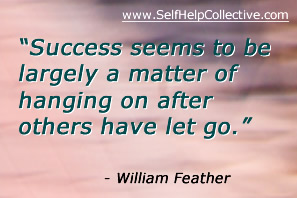 The thing is, though, there is not just one recipe for success, and that's why this page also features a short video by Deepak Chopra as well as my own video thoughts - I hope you enjoy all that this page has to offer you...

The "Laws of Success"

It's funny as I feel completely unqualified to talk about such laws. I mean, I'm not successful - am I?

I'm sure you probably think that too, about yourself; think that you have to be seen on one of those YouTube videos dropping sound-bites about success in front of a paying (and whooping) audience to be considered a success!

Well that's not true. We are all successful, in varying ways. We all know what works and what doesn't work. Deep down, we know, anyway. Just because many others have succeeded in doing what you can do - e.g. develop computer skills and literacy skills; have a thirst for knowledge and self-understanding - does not mean that you too are not a success.

Did you know, for example, that there are estimated to be 8 million millionaires in USA alone. Are these people successful or are there 'too many' millionaires for it to be now considered a success? Think about it.

So that's why I agree with the above common-sense success principles and why I can also state my own - the ones that have worked for me.

So my laws of success are:

(And I share more success laws in the video below.)

And I've been working in such a job, more or less, since 2001. However, it's only in the last few years that I have realised how successful I am already.

(You can learn more about me, here!)

You're looking for some success secrets or principles right now, but do you realise how much you have already achieved in this life? Do you, really? It would be great if you thought about this, for a moment or two, and then get in touch with your success story!

Deepal Chopra has written a book called The Seven Spiritual Laws of Success and this 2 minute video briefly explains his seven laws. In the video, Deepak says this: "Everything that is happening in this moment is the result of all the choices that you have made mentally in the past". Scary, eh! - Don't you think? (Or is it empowering?)